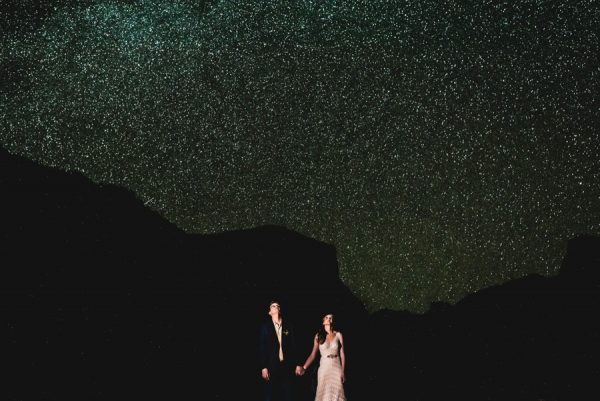 This surreal photo might look familiar, as it was featured in our 2016 Destination Photo Collection. I love how the image illustrates a sense of hope and wonder at the future ahead of these newlyweds, and I especially love how Clarkie Photography expertly captured the pair under the stars at Yosemite National Park. Today, Richard Clarke is here to share the details behind this beautiful night sky portrait. Enjoy!

11pm at night, on the way back to our camp in the Valley after the reception

I’ll start by saying I am not an expert at star shots, and don’t claim to be, but I could envision the type of image I wanted. I wanted a simple shot of the couple gazing skywards with the enormity of the night sky behind and above them, as well as the outline of the famous Yosemite Valley, which Tunnel view is famous for.

The final image is just one single exposure but I had about 8-10 attempts using various lighting approaches and compositions. The couple was pretty exhausted after a long day, but they definitely wanted to try a shot which incorporated the night sky in the park. As we drove back into the valley after their reception I decided to pull over at Tunnel View and see what we could create. At 11 PM, it’s pitch black there, but still crowded with other photographers taking long exposure night shots and we even had a few drag racers screeching down the tunnel and past us (not what you might expect for Yosemite!). I obviously needed to set up my camera on a tripod due to the long exposure and decided to do this across the road from the couple. One big issue I had was every time a car drove past with its headlights, it lit the couple and ruined my exposure; however, my positioning gave me the composition I felt that I needed, so we just had to be patient and keep trying. I aborted a few exposures due to car headlights entering the frame. 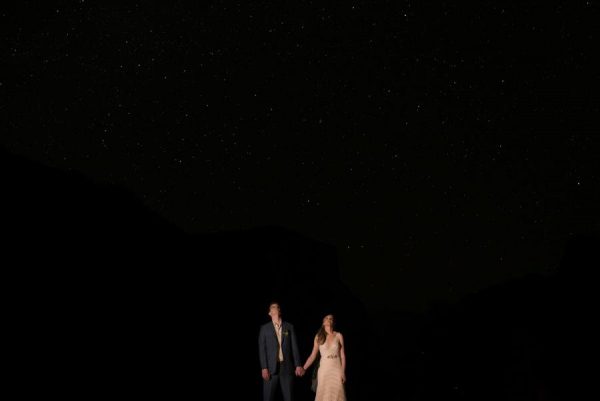 I wanted this to be one exposure, so I discounted the idea of multiple exposures and creating a composite – which would have allowed me to achieve a perfect sky and couple exposure. I’d also seen many single frame star shots with a couple in them, but oftentimes the couple isn’t very crisp, as the photographer has committed to using just ambient light with high ISOs and a long exposure, hoping the couple stays perfectly still. I wanted to avoid that and freeze the couple. So I decided off-camera flash would be the right approach to light the couple. I want to point out that I did have a Lowel GL1 Hotlight with me (which I used a few times in the shot process), but it just wasn’t really working for me. However, the GL1 Hotlight did come in handy as it allowed me to briefly light up and focus on the couple before turning it off and beginning the exposure. So now I’d committed to using a flash, I just had my wife stand off to the side with the remote triggered flash directed at the couple. I believe I had a Magmod grid and gel on the flash. I figured a 15-second exposure would give me enough of the stars to work with in post and firing the flash at the end of exposure would light and freeze the couple. In camera, I could see that I should probably have increased the exposure time and/or opened up the aperture further, while reducing flash power, to better expose for the sky, but hindsight is a wonderful thing. It was also close to midnight and the couple was ready for bed, the groom is even yawning in one of the exposures. So, rather than shooting another 10 shots to perfect it, I figured they were standing in front of the pitch black outline of the valley so if I needed to bring up the star exposure and clarity in post, using radial or graduated filters in Lightroom, I could easily do so.

Very simple. Like I suggested above, I just used a radial filter to isolate the couple to keep their exposure where I needed it to be and increased the exposure and clarity outside of the filter to bring out the stars and valley outline. I played with the tone curve a lot to get the balance between darks and highlights right and I maintained some of the warmth of the couple while applying some cooler tones to the night sky. That’s pretty much it!

I did actually do one wider shot which also turned out great, arguably giving a greater sense of scale. 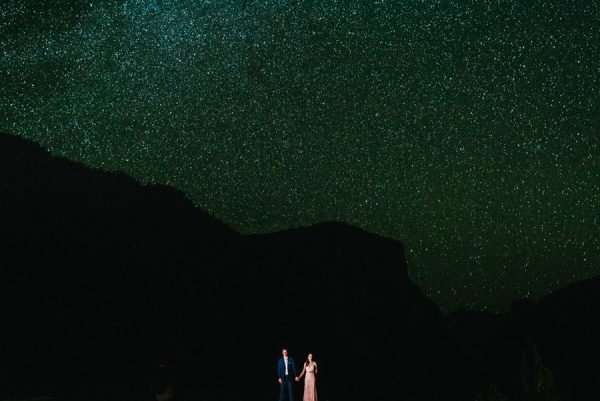 Big thanks to Clarkie Photography for giving us such a cool behind-the-scenes look!

You can find more Behind the Photo articles here.